By craigruark
By Craig A. Ruark
Special to the Las Vegas Business Press

As “Rebel yells” go, it may not have been as loud as those heard during the typical UNLV basketball game. But the students and listeners of KUNV, the university radio station, made enough noise to stop a management takeover by KNPR.

Still, there will be changes to the station.

On Dec. 4, a docket item that would have allowed Nevada Public Radio Corp. (NVPR) to manage KUNV was tabled, without a future date.

UNLV President Lee Jessup told the board that there have been a number of comments and suggestions made by students and the community volunteers for the improvement of the station, and he wanted to investigate those ideas further before committing to the takeover agreement.

Frank Mueller, general manager of KUNV, has been tasked with developing a new operating plan for the station. Once complete, it will be presented to Rob Ulmer, dean of the Greenspun College of Urban Affairs. “We should have a plan in place by March,” said Ulmer.

KUNV, like other public broadcasting stations, relies on listener support for its funding. During the recent Fall Pledge cycle, the station raised $60,000 from community donations. Over the years, that support has not been able to pay all of the operating expenses and, according to Gerry Bomotti, UNLV’s senior vice president for finance and business, the university has been subsidizing the station to the tune of $220,000 per year.

KUNV’s inability to generate sufficient listener-supported donations correlates with a decline in listenership. In 2014, the station was rebranded as KUNV 91.5 “The Source,” and the contemporary jazz format jumped in ratings from about 35,000 people two years ago to 55,000. However, according to the latest ratings, that number has again fallen to 38,000, which ties KUNV with three other stations in 38th place among 42 radio stations.

Under the NVPR proposal, the university would still own the licenses for stations KUNV and the two associated digital channels (HD1 and HD2). However, NVPR would assume all of the expenses of running each of the three stations.

The $220,000 that the university is spending on KUNV could then be brought back in for use in the classrooms.

In 2014, the Corporation for Public Broadcasting (CPB), a foundation set up to distribute government grant money to public radio and television stations across the United States, gave a grant to NVPR to look for partnership opportunities and then evaluate and create business models. The result of the evaluation was a proposal to UNLV that NVPR would be willing and able to manage and operate KUNV, utilizing an economy of scale, and relieve the university of the expense of operating the station, while allowing the university to retain all of the marketing and UNLV identification.

Flo Rogers, president and general manager of Nevada Public Radio, told the board, “Twenty intense months of evaluation and negotiation went into the agreement. Together, UNLV and NVPR would create a station that better reflected the campus, and the deal would bring financial stability to KUNV.”

For NVPR, Rogers is looking at the proposed partnership as “an opportunity to address our goal of engaging younger and more diverse individuals in public media production and management.”

“It’s a win-win to create rich educational and paid opportunities for students interested in broadcast and digital media. In turn, we create a pipeline of talent for our and other local media outlets through news, music, Desert Companion, video and online internships and graduate assistant positions. In turn, we will infuse all our media outlets with younger more diverse voices and viewpoints. We can also bring more national student-oriented journalism training projects (such as NextGen) to the station through our NPR affiliation. We anticipate student opportunities will increase over time through all of our public media brands,” said Rogers.

Today, KUNV has slots for up to 50 students per semester — 30 on the air doing their own program and 20 doing news. There are also 30 community volunteers.

Will the fans of KUNV’s jazz programming be able to keep their station as it is? 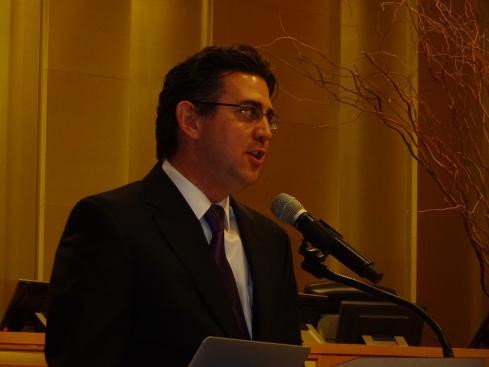 Jeremy Aguero of Applied Analysis tells a philanthropy conference–volunteer hours are up sharply across the Las Vegas Valley. (Craig A. Ruark, special to the Las Vegas Business Press)

By Craig A. Ruark
Special to the Las Vegas Business Press

The aphorism “A rising tide lifts all boats” seems to be the theme for Las Vegas Valley nonprofits during this first quarter of 2016.

Led by founder and CEO Julie Murray, the Moonridge Group surveyed large corporations and small businesses in Nevada to determine the amount of funds and donated time given to charities, the types of charities and causes, and the expected returns on those charity investments.

The statistical results of the survey were presented by Jeremy Aguero, principal analyst at Applied Analysis, who gave a guardedly optimistic report.

While encouraging people to think more about corporate philanthropy, Aguera explained, “People have started counting things that they had not counted in the past. So while some of the numbers presented may seem like a huge leap forward, it may be a result of better and more meticulous accounting by the companies that are doing the giving.”

At the top of the list and perhaps the seemingly most impressive figure is the number of volunteer hours reported. In 2015, it reached 445,000, up sharply from last year’s 260,000.

Just as the decision-making process has changed, so has the priority for the types of charities. Where health and social services used to dominate the pie chart, it now occupies just 26 percent. The leader is education at 44.2 percent with 25.8 percent of that going to higher education. One hundred percent of the companies surveyed cited education as a key element of corporate philanthropy, reflecting the fact that education is the key to a better workforce and to attracting a more diverse business economy.

“Education is the silver bullet,” said Aguero. “Education is an underlying element that corporations can default back to because it deals with their bottom line and because the return on investment is clear, consistent and far-reaching,” cited Aguero.

Survey participants were asked to explain their “most important factors in giving,” and the results (in the order of importance) seemed to run along the same lines of most business decisions:

Not surprising, a national study found that women are more charitable than men at every income level. Predictions are that women are expected to inherit 70 percent of the $41 trillion in intergenerational wealth transfer that will take place over the next 40 years. Estimates are that by 2025, 60 percent of U.S. billionaires will be women. 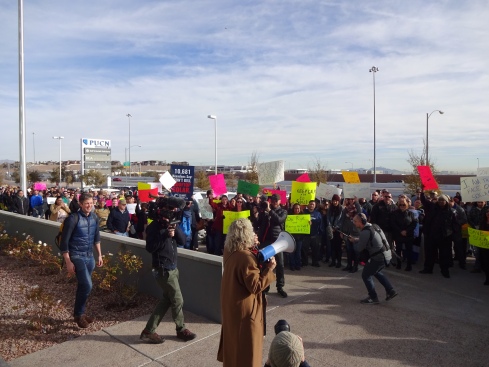 Protesters gather outside of the PUCN building in Las Vegas.

By Craig A. Ruark

The Public Utilities Commission of Nevada ended the ten-month controversy on the Net Energy Metering (NEM), with a final decision last Friday, February 12th. Most feel that the decision also killed the rooftop solar industry—at least for the time being.

With Friday’s decision, the new rate structure that went into effect January 1, 2016, will remain with one change. Instead of yearly incremental changes, the rates will change every three years until the year 2028. According to the PUCN, this every three-year cycle will be consistent with the general rate case cycles of both Nevada Power and Sierra Power, both of which are subsidiaries of NV Energy.

While the service charge went up, the amount that NV Energy will pay for excess energy generated by NEM customers went down from 11.6 cents per kilowatt hour about 9 cents from January 1, 2016, through December 31, 2018. That amount will decline to 2.6 cents by Jan. 1, 2028.

The reason for the change in NEM rates is the $315 million cost subsidy that non-net metering customers have been paying to support the rooftop solar customers. That equates to $1,544.11 per month for each NEM customer. NV Energy claims that there are two causes for the increase in NEM costs, fully dedicated employees and the Renewable Energy Department.

In addition, NV Energy stated that the company receives less revenue from NEM customers while the fixed and demand costs incurred by the utility to serve the NEM customers largely remain the same.

However, many opponents of the change say that the subsidy numbers are inaccurate when you take into consideration the saving afforded to NV Energy by having over 17,000 rooftop solar customers connected to the grid.

Distributive generation, as it is called, is far more efficient than building more centralize power plants. And when calculating the contribution made by residential and commercial rooftop solar the PUCN needs to take a number of things into consideration.

A study by Energy + Environmental Economics (E3), was present to the PUCN, which demonstrated that NEM policies do not result in NEM ratepayer free-riding and unreasonable cost-shifting. It further points out that NEM ratepayers create an estimated total net present value to the non-NEM ratepayer of $36 million per system during their lifetime. With an average lifetime of 25 years, that equates to a benefit of $1.4 million per year for each NEM customer. E3, founded in 1989, advises utilities, regulators, government agencies, power producers, energy technology companies, and investors on a wide range of critical issues in the electricity and natural gas industries.

However, the staff of the PUCN rejected the E3 study on the basis that it included “alternative analysis of key drivers,” some of which are listed above.

Regardless of whether the PUCN is right or wrong, their decision has sent the rooftop solar industry into a tailspin. Solar installation sales have decreased dramatically since the December 22 decision on the new rate structure that took effect on January 1st of this year. Massive layoffs have been made, and some of the smaller companies are shutting down operations completely.

Meanwhile, across the country and around the world, energy experts are convinced that distributive generation is the way of the future. One such company who agrees is Duke Energy, the largest electric power holding company in the United States. Duke is actively changing their business model to include distributive generation and has recently purchased a majority interest in REC Solar, a rooftop installation company.

Here in Nevada, the battle is not over. On January 25th, several solar companies held a press conference to announce the kickoff of a drive to gather 55,234 signatures from registered Nevada voters. If successful, a ballot initiative that would require NV Energy to revert to the 2015 Net Energy Metering payment and grid connection fees and eliminate a cap on the number of net metering systems that can be brought online.

Backing the signature gathering campaign is former Nevada Governor Robert List who told the media; “As things now stand, the residential solar industry has just basically been destroyed, and with it the opportunity for Nevadans to sign up and participate and help save our environment, and save money, and do the right thing.”

In addition, John Bamforth and Stanley Schone, represented by the law firm of Jolley, Urga, Woodbury & Little, have filed a class action lawsuit against NV Energy and are demanding a jury trial.

Talk among small solar installation companies after the PUCN decision on Friday indicates that there are more lawsuits coming.

“Three years is the best we are going to get for now,” said Louise Helton, Vice President of 1 Sun Solar, a locally owned solar company that has been selling and installing solar systems in Las Vegas since 2009. “This will give us time to follow through with the lawsuits and approach the legislature about changes to the PUCN’s decision.”